Yet Valderrama vowed to retain his council position if he got the new job and brushed aside all objections from his constituents.

When Hornish stepped up and recognized time constraints were coming, resigned his position as deputy mayor and stepped off all but one committee, Valderrama—oblivious o his own actions two years earlier—objected and engaged in a transparent attempt to set Hornish up to fail and ultimately force him off the council.

END_OF_DOCUMENT_TOKEN_TO_BE_REPLACED

Tom Vance, who was defeated in November 2015 in his reelection bid for the Sammamish City Council, is gearing up to run against King County Council Member Kathy Lambert, say people familiar with the situation.

Vance has been soliciting endorsements for a run, people tell Sammamish Comment.

He also dropped an expansive Public Records Request on Lambert’s office for 16 years of data for travel records and meeting attendance.

END_OF_DOCUMENT_TOKEN_TO_BE_REPLACED

Analysis of one week’s worth of voting results from Sammamish shows Sound Transit 3 losing here by a 51.69% to 48.30% margin.

Vote counting continues to Nov. 29, when the election results are certified.

Sound Transit 3 is the $54bn mass transit plan that includes $27bn in tax hikes over 25 years.

Sammamish gets reduced bus service out of the plan and a prospective park and ride at the north end.

END_OF_DOCUMENT_TOKEN_TO_BE_REPLACED

Ballots for the Nov. 8 election will be mailed Oct. 19 by King County Elections.

Like most states, Washington has early voting, this in the form of mail-in voting.

Because of ballots mailed overseas to expats and military personnel, the state counts ballots for two weeks after Election Day as long as the mailings are postmarked no later than this day.

END_OF_DOCUMENT_TOKEN_TO_BE_REPLACED 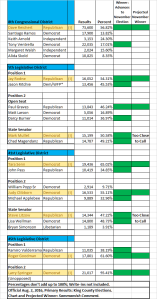 Click once on image to enlarge, then click on the image a second time. Write in votes are excluded from the data analysis.

Roger Goodman, the Democrat seeking a sixth term in the State House of Representatives for the 45th Legislative District, defeated Sammamish Deputy Mayor Ramiro Valderrama in his home city in the Aug. 2 primary.

For Valderrama, who carried every precinct in the city-wide City Council November election in 2015, this is a stunning reversal of fortune.

It’s a clear message from Sammamish voters that they want Valderrama to stay in Sammamish to serve more than a year of his four year term to which he was reelected just 10 months ago.

District-wide, Valderrama received only 38% of the vote in the primary. The primary result historically is a predictor of the final result in the November general election. This is Nov. 8 this year.

A color-coded map and more analysis is after the jump.