Update,  June 6: The City Council meets tonight and this topic will come up. The meeting begins at 6:30pm at City Hall; Public Comment is scheduled about 7:25pm. Mullor’s study may be accessed here. 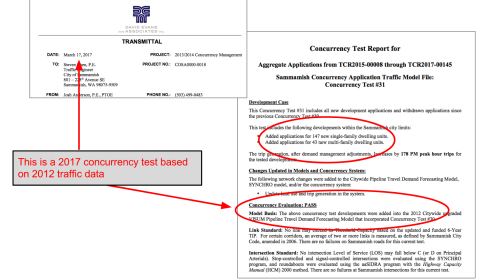 Miki Mullor, a Sammamish resident, used Public Records Request (PRR) to obtain 2014 traffic count data that the City has but does not generally use in its concurrency testing.

END_OF_DOCUMENT_TOKEN_TO_BE_REPLACED

One of the issues facing the City Council as it begins its review of the regulations for the Town Center is whether to help finance elements of it to kick-start development.

This issue is not part of the Planning Commission’s regulations recommendations that will be under review beginning March 15 (see following post); this issue was deemed by the Commission to be beyond its scope of work.

As a former member of the Commission, and a long-time activist regarding land use and traffic issues, I was of the opinion going into the Town Center regulations process in early 2008 that the City should not contribute to financing TC stuff–this should fall to the responsibility of the developers under the “growth pays its own way” theory.