The precinct analysis of the August 1 primary in Sammamish yielded few surprises, but it

gives the City its first look at how the Greater Klahanie area votes.

Klahanie was annexed into Sammamish in January 2015, but the City Council executed the annexation in two basic steps: the legal one, in January, but the “political” annexation came too late for the area to vote in the November 2015 City Council elections.

City officials said there was just too much to do to accomplish the political annexation sooner. Critics believed some officials didn’t want Klahanie voting in what was anticipated to be a close election for some candidates.

Regardless, the residents voted this time—though not in great numbers.

Segmenting Klahanie voting is easy: it’s part of the 5th Legislative District. There are 6,388 registered voters and only 1,664 of them voted in the primary, for a dismal 26% turnout. Not everyone voted in every City Council race. 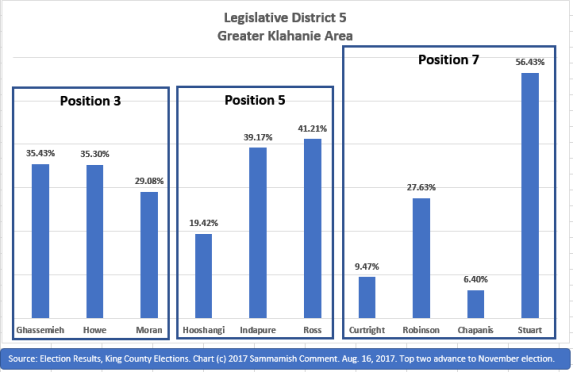 One candidate lives in Klahanie, Rituja Indapure, running in Position 3. Her opponents were Chris Ross and Ryika Hooshangi. Indapure at times campaigned with Pam Stuart (Position 7) and Minal Ghassemieh (Position 3).

Despite being a Klahanie resident, Indapure came in only a close second (to Ross), picking up 39% of the vote to his 41%. She carrier about half the precincts, with Ross winning the other half. 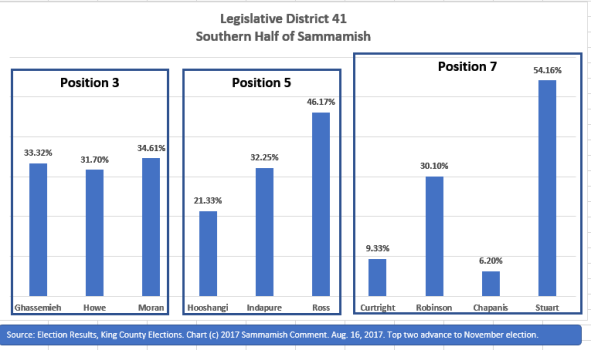 Hooshangi was eliminated in the primary. How her vote splits between Indapure and Ross in Klahanie, an across the City, will likely determine the outcome. Historically, the vote of a third candidate splits about even between the top two. Ross was the leader in the overall balloting with 47% of the vote. He only has to pick up three percentage points to win, while Indapure needs 18 ½ percentage points—a huge uphill climb that is unlikely. 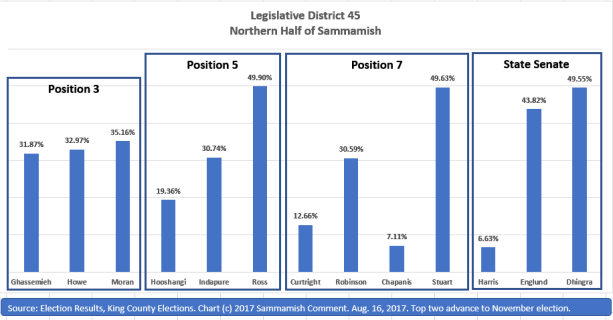 In Position 3, Ghassemieh and Howe essentially tied in Klahanie with 35% of the vote apiece. Moran came in third at 29%, a bit of a surprise considering that she, as a member of the Sammamish Plateau Water, already represents Klahanie as an elected official. 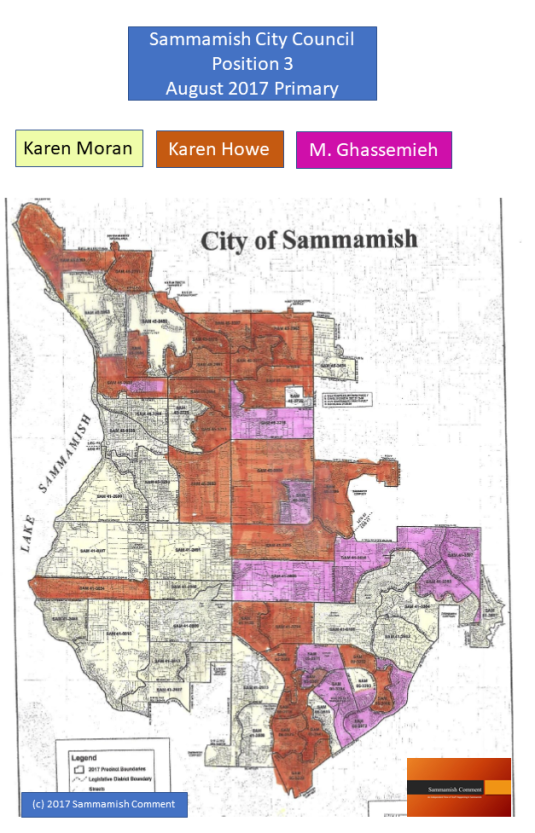 The three-way voting for Position 3 was close city-wide. Fewer than 100 votes separated winner Moran over second place Howe, who led Ghassemieh by 300 votes. Percentages were 364.6% for Moran, 34% for Howe and 31% for Ghassemieh.

In the 41st Legislative District, the Southern half of the City, the end results mirrored the city-wide results. Turnout was 27%.

In the 45th Legislative district, the Northern half of the City, Moran took 35% of the vote compared with 33% for Howe and 32% for Ghassemieh. Howe carried more precincts, but Moran won more votes. The turnout was 39.5%, fueled by a primary to replace the late State Sen. Andy Hill, who died in October.

But the precinct win-loss record for Position 3 is misleading. It was common for a winner-loser to do so by fewer than 10 votes and it wasn’t unusual for the difference to be five votes or less.

This race is a toss-up going into the November election, with political demographics probably favoring Howe. 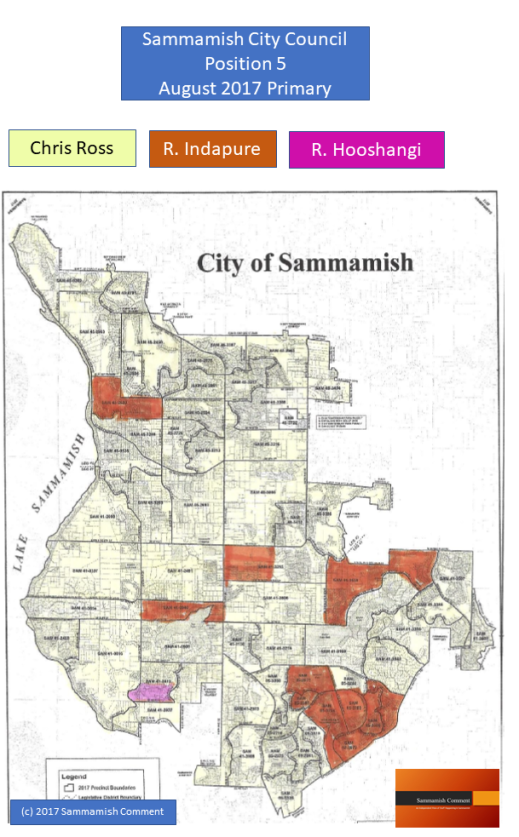 Hooshangi, who among the three running has the most engaging personality, ran a surprisingly poor third. She won only 21% of the vote. She didn’t win a single precinct, though she tied Ross in one.

Indapure, as noted, drew the most strength in Klahanie but she came in a close second there with Hooshangi taking 19% of the vote. Indapure only won nine precincts citywide and tied Ross in one more.

Ross is the heavy favorite to win in November.

Stuart walloped second place finisher John Robinson 52.5% to 30.5%. The third place finisher, Melanie Curtright, was not a factor and the fourth name on the ballot was Roger Chapanis. He dropped out of the race too late to remove his name from the ballot. 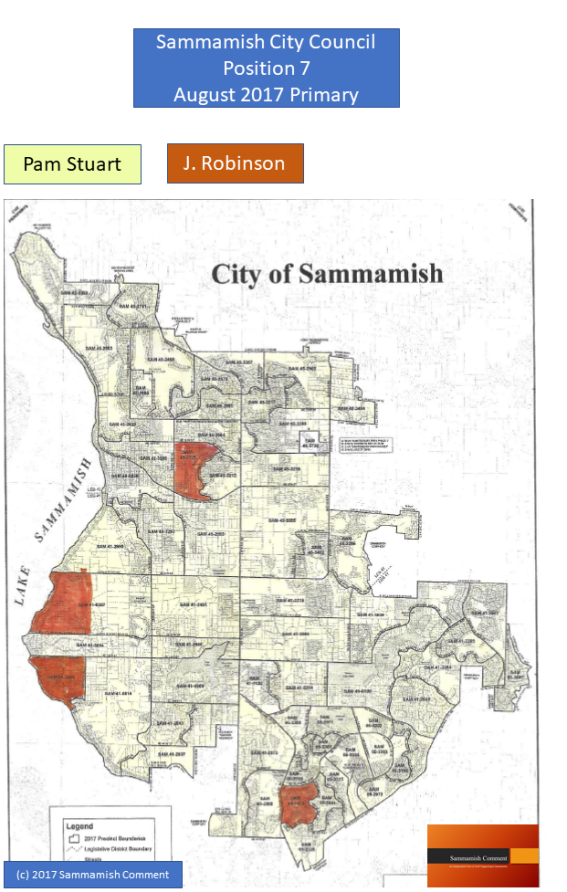 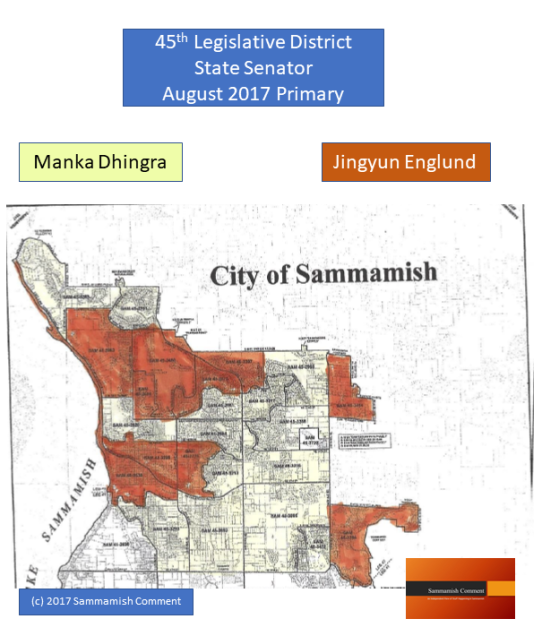 Robinson carried only two precincts and tied in one.

Stuart is the heavy favorite.

King County deputy prosecutor Manka Dhingra took 49.5% of the vote in the Sammamish portion of the 45th vs her opponent, Jingyun Lee Englund, who received 43.8%. Districtwide, Dhingra led by more than 10 points, taking 51% of the vote.

Dhingra is the heavy favorite to win in November.