Thirteen candidates filed for four positions on the Sammamish City Council, the most since 1999 when 40 people filed for seven positions for the first Council.

This means there will be primary races in the August election for each seat up this year. The top two of each race will advance to the November general election.

Because all four incumbents announced they wouldn’t run for reelection, this invited more people than usual to become candidates; unseating an incumbent is often an uphill battle.

But this isn’t the only reason there are 13 candidates.

The great Klahanie area was annexed to Sammamish and it had long been expected people residing there would run. Two candidates, Jason Ritchie and Rituja Indapure, live here.

Other candidates are scattered throughout the City. 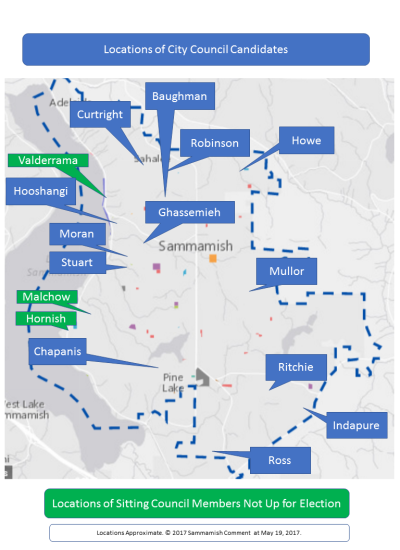 Two new faces were elected in 2015: Christie Malchow and Tom Hornish. Incumbent Tom Vance was defeated after one term, by Hornish, becoming the first sitting mayor in Sammamish to lose reelection.

Malchow defeated former Council Member/Mayor Mark Cross, an ally of Vance, who was attempting a comeback.

Incumbent Ramiro Valderrama, targeted for defeat by Vance and his allies, won reelection by the widest margin of any incumbent in City history.

The 2015 election demonstrated voter discontent with the direction of the City. It didn’t stop there.

With the Council evenly split 3-3 and Mayor Don Gerend providing a swing vote, there was little dramatic change.

Hot issues more likely drove the large number of candidates. Anger has been bubbling up on a variety of topics during the last four years.

Growth, tree loss to development and traffic have been the top issues. The development of the East Lake Sammamish Trail by King County continues to be a major controversy.

Scores of people filled the Council chambers on a number of occasions, complaining at Public Comment sessions that sometimes ran two hours.

Facebook is filled with angry comments on these topics.

After the 2015 election, word quickly emerged that Kathy Huckabay and Tom Odell were top targets for defeat this year. Their ally, Bob Keller, was a distant third for targeting for defeat.

Gerend, who continuously served on the Council since the first election in 1999, was rumored to be ready to pack it in when his term expires this December.

Gerend and Keller surprised fellow Council members by announcing in January they would not seek another term. Huckabay and Odell followed months later.

A new direction is certain after this election. It’s just unclear what this will be.

Few of the candidates are known, which means at this date–one day after the filing deadline–their positions and reasons for running are largely unannounced, beyond the generalizations offered by every candidate.

Details will emerge in the coming weeks and months leading to the August primary.