Position 7, sweeping all 61 precincts and adding almost 11 percentage points to her primary victory.

Sammamish Comment believed both candidates would served citizens credibly, but following our endorsement interviews with each, flaws emerged that reduced our conclusion to a “Recommendation” rather than an “Endorsement.” We recommended Stuart. 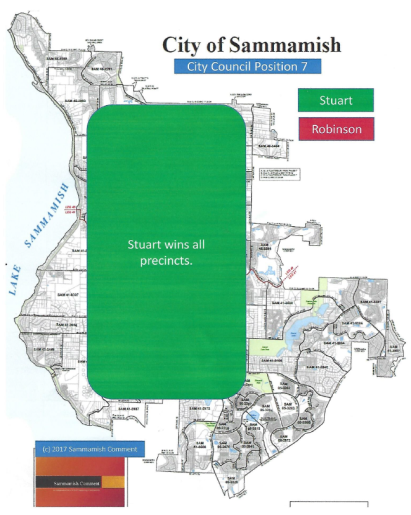 She clearly researched the issues more thoroughly than Robinson, though this is not to say he was ignorant of them. Robinson had done a credible job.

Stuart clearly was the more aggressive campaigner and to us, demonstrated she wanted the job more than Robinson, whose campaigning was so lackluster that we were reminded of “Low energy Jeb Bush” from the US presidential Republican primary—a characterization Robinson didn’t like much.

We were offended by Stuart’s lack of voting in City elections. During her 15 years living in Sammamish, she hadn’t voted in a single City election until her own primary in August. Her excuse—she didn’t know the elections were taking place—lacked credibility.

But Robinson said he thought the most basic of retail politics, doorbelling, was not a productive use of time. We found this more offensive than Stuart’s voting record.

Stuart has a better understanding of staffing than Robinson.

In the end, we felt Stuart will be more aggressive in holding the City Manager and staff accountable, something that is sorely needed these days, as traffic concurrency issues demonstrate.

With 52% of the primary vote, Stuart’s election in November was largely a given. Voters not only endorsed their primary vote, the pick-up of 11 more percentage points clearly favored someone who will engage with them.