Paul Stickney and Richard Birgh, two residents of the Town Center who have commercial development aspirations, filed the lawsuit Aug. 12 after the Central Puget Sound Growth Management Hearings Board rejected a challenge on procedural grounds.

Sammamish Comment discovered the lawsuit while reviewing the number of lawsuits filed against the City, or that the City has filed against others, regarding land use actions. 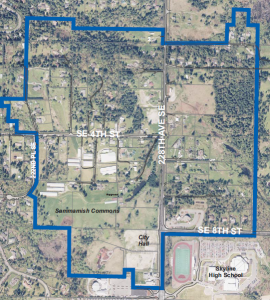 Stickney and Birgh challenged the legal status of the Town Center sub-area plan after the 2015 Comp Plan rewrite failed to incorporate the plan either by reference, insertion or attachment to the rewrite.

The original Com Plan, adopted in 2003, excluded a plan for what became the Town Center, an area roughly bounded by Arbor School on SE 228th and skirting along Mary Queen of Peace Church to 222nd St; north to Main St; East to a line just west of Eastside Catholic High School and south to SE 8th St. There are 240 acres. Construction is underway in the northeast, northwest and southeast quadrants on commercial-retail-residential projects.

Stickney and Birgh live in the SE quadrant.

The sub-area plan was a process separate from the 2003 Comp Plan and was completed in 2008, according to the lawsuit in King County Superior Court. Enabling ordinances were adopted in 2010.

But the City failed to include the sub-area plan in the 2015 rewrite, Stickney and Birgh allege.

Subarea plans must be incorporated into a jurisdiction’s comprehensive plan under state law, the lawsuit says.

The Hearings Board declined to rule but concluded the 2015 Comp Plan didn’t appear to include the Town Center Plan.

The Hearings Board said the action by Stickney and Birgh was not timely.

The Board also declined to rule whether the Town Center Plan was an active element of the 2015 rewrite.

“The legal status of the 2008 Town Center Plan was therefore left uncertain,” the lawsuit says.

Stickney and Birgh filed for reconsideration with the Hearings Board. This is still pending.

In the meantime, the lawsuit asks the King County Superior Court to determine whether the Town Center Plan is “no longer in effect,” or whether it was de facto incorporated by reference into the 2015 Comp Plan rewrite.