After starting 2016 with a new era of transparency and access, the Sammamish City Council may revert to holding its annual January retreat at the Suncadia Resort in Roslyn, east of the Cascade Mountains.

The timing–January 19-22–puts at risk driving over Snoqualmie Pass in a winter storm. The location makes it difficult and unlikely all but the most diehard members of the community will attend the meetings. It’s also costly: being more than an hour away, over the pass and through the woods means anyone going has to rent a hotel room for the three-day retreat.

Even the Sammamish Review and Issaquah/Sammamish Reporter historically don’t show up to report on the meetings and hold the City Council accountable to the public.

Only Sammamish Comment made the trek in January 2015, the first time it had done so. 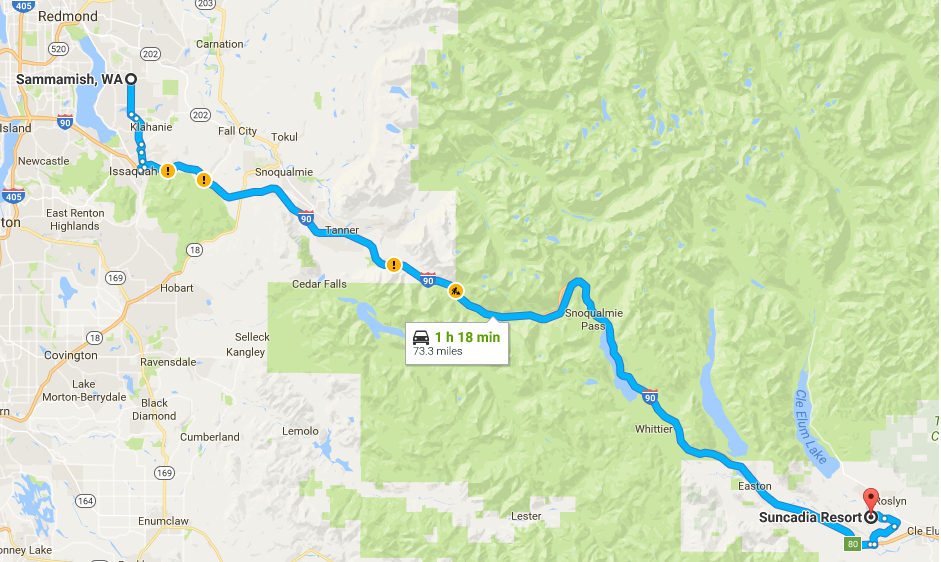 The long drive over the mountains and through the woods to the Suncadia Resort for the Sammamish annual Council Retreat could be longer and challenging in the January winter storms, but that’s where the City Council is thinking of going in January 2017.

Captive audience and no audience

Council members chose the location in the past to make it difficult for their own members, and staff, to leave the retreat meetings. But it also meant that despite the days being open meetings, the practical effect was they that were closed. No public participation occurred.

During 2015, The Comment made an issue of this. Toby Nixon, then-president of the Washington Coalition for Open Government, criticized the Sammamish City Council for the location, lack of transparency and lack of access for citizens. Nixon, then as now a member of the Kirkland City Council, said Kirkland in 2015 chose the Beaver Lake Lodge for its retreat, right here in Sammamish.

The public pressure caused the 2015 Council to delay site selection. The November 2015 Council election saw the defeat of Mayor Tom Vance and his allies, Mark Cross and Hank Klein. Council member Ramiro Valderrama was reelected, along with newcomers Christie Malchow and Tom Hornish. The latter three made it known to then-City Manager Ben Yazici, who was retiring in February 2016, and his successor, Deputy City Manager Lyman Howard, that they wanted the retreat at a more local site.

Given the short timing, the Council held its retreat in Tacoma. The drive was no less onerous, given the distance and traffic, but at least it wasn’t over Snoqualmie Pass. Several citizens chose to attend at least some of the retreat and Don Gerend, selected Mayor to succeed Vance, gave citizens daily opportunities to participate with public comment.

Sammamish Comment attended—but the Sammamish Review and Issaquah/Sammamish Reporter continued to neglect their Fourth Estate duties and subsequently relied on accounts from the City Staff and Council for their reporting.

Sammamish Comment learned this week that city officials appear to be leaning toward returning to Suncadia this year, citing highly favorable fees quoted by the resort. Nearby locations provided more expensive cost estimates, The Comment was told.

It’s all well and good for the City Council to be watching the budget—but at what cost?

Returning to Suncadia reverts to a long history of locating three days’ worth of discussions that set the priorities for the City for the year, with ramifications for several more years. Citizens are effectively denied opportunities to provide their ideas and inputs.

One step forward, two steps back…

After a bitter 2015 election year, the selection of Gerend as mayor, Valderrama as deputy mayor and the addition of Malchow and Hornish to the Council heralded a new era of openness that had been lacking for a number of years.

The Council this year has been several steps forward to improve outreach to citizens, with real and virtual town hall meetings. But there is major public dissension about how the Council is doing its job and overseeing staff through the City Manager.

A move to return to Suncadia and effectively deny citizen input and accountability is two steps back for every one step forward.

The few dollars saved by going back to Suncadia comes at a cost to the public that may well be more intangible than putting a price on the dollars and cents.

No decision yet, but make your feelings known

There is no decision yet on the Retreat’s location, but it’s coming soon. Citizens may want to email the Council and City Manager or appear at the October 4 meeting for public comment to weigh in on this.

3 thoughts on “Council nears decision to send annual January Retreat back to Suncadia, across mountains”