The power of Initiative and Referendum became effective in Sammamish yesterday.

Harry Shedd, chairman of Citizens for Sammamish, led the charge to get the Sammamish City Council to adopt the Initiative and Referendum.

When the City was incorporated in 1999, the power of I&R wasn’t included in the City charter. Omission was claimed by City officials a decade and a half later to have been an oversight, but Karen Moran and Di Irons, two citizens involved in the incorporation at the time, said City officials deliberately left the power out.

Regardless, Citizens for Sammamish, a grass roots group chaired by Harry Shedd, pressed the current City Council last year to adopt an ordinance granting the power. The Council refused, with a majority simply opposed to giving Sammamish voters the right to I&R. Shedd continued his crusade and in January this year, the Council agreed at its retreat to put the issue to a non-binding Advisory vote. It later set April 28 as the election date.

Although a majority of the Council informally said at the retreat they would honor the outcome of the Advisory vote, and later officially said they would remain neutral, in fact the City and several Council members engaged in a stealth campaign to defeat the I&R, sow confusion, disseminate misinformation and suppress information and ultimately voting.

Two Council Members voted against advancing the I&R to an enabling ordinance after the Advisory vote passed by a 55.5%-44.5% margin: Deputy Mayor Kathy Huckabay and Member Tom Odell.

Huckabay voted against adopting the ordinance; Odell was absent on the night of this vote.

Mayor Tom Vance, a staunch opponent of the I&R, didn’t actually vote to adopt the ordinance on the voice vote but under Council rules, his was recorded as an affirmative vote with the majority of the Council.

This was nothing more than an “election vote;” Vance is up for reelection Nov. 3. Vance’s opponent, Tom Hornish, supports the I&R.

Vance and Odell live in the same precinct, which voted to approve the I&R by a 56%-44% margin. 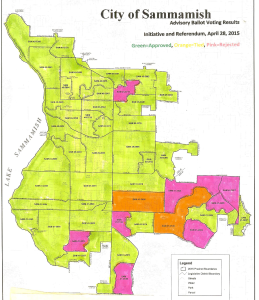 Mark Cross, a close ally of Vance, Odell and Huckabay, is running to return to the City Council after a four year absence; he is opposed to the I&R. He, along with his opponent Christie Malchow, live in the same precinct, which voted 67%-33% in favor of the I&R.

Ramiro Valderrama, the Council’s proponent of the I&R, is nominally opposed by Hank Klein, who dropped out of the race but whose name remains on the ballot. Nancy Whitten is retiring from the Council after three terms.

Every precinct in which the Council Members and candidates for Council reside voted for the I&R. Thirty-seven of the City’s 47 precincts approved, eight rejected the I&R and votes were tied in two precincts.

Huckabay later attempted to dismiss the outcome, saying there was a low voter turnout and voter confusion. However, the Council selected April 28 for the Advisory vote, knowing this is traditionally a low-turnout date and the Advisory vote was the only issue on the ballot for Sammamish Voters. Huckabay was the leader of a secret campaign to sow confusion and suppress information, attempting to bar Citizens for Sammamish from the Boys and Girls Club and Fire Station 82 (the one on north NE 228th Ave.) from holding meetings at these locations. CFS and its chairman Shedd led the campaign for the I&R.

The City also wrote little about the I&R in the Newsletter while turning the document into an electioneering piece in favor the the Klahanie annexation. Only through the efforts of Valderrama and Whitten was there information in the Newsletter and the City website. The April issue of the Newsletter, the last one before the April 28 election for I&R and the Klahanie annexation, initially was drafted with about a page-and-a-half of information about Klahanie but nothing about the I&R. Valderrama protested and a small I&R article was inserted.

See the Related Stories links above for more detailed information about the City’s secret campaign against the I&R.

Vance, Huckabay and Odell wanted to defeat the I&R and, failing that, dispose of the issue before the Nov. 3 election so it wouldn’t be an issue during the campaign. In that, at least, they won.

But citizens are the real winners.

The question remains, however, if Vance wins reelection and Cross is elected, whether they, along with Odell and Huckabay will undertake efforts to undermine or even repeal the I&R; the latter prospect, ironically, could be through an Initiative.