When Josh Amato announced his candidacy for Sammamish City Council last spring, he posted a video on his campaign website disclosing an arrest at age 21 for a misdemeanor.

However, the police report from the Tacoma Police Department discloses that the circumstances surrounding his arrest were far more serious than Amato revealed  – it was for intimidation, stalking and threats with a weapon – a felony.

In addition, Sammamish Comment uncovered political documents on the Internet that connect Amato, then campaign manager for Dick Muri, a Republican candidate for Congress, to groups with racist and white supremacist leanings.

Shortly after The Comment discovered the key document, Amato’s name was removed from the posting on the Internet.

Amato’s version of his 2010 criminal charges

In a video posted on his website, Amato tells voters that “only way for us to move forward as a community is to trust each other. I feel strongly that the only way for me to earn your trust is to be open with you from day one.” He then continues to tell his audience of a 2009 incident in which he was arrested and charged for suspicion of threatening bodily injury:

“I had a family member  who told me she was in an abusive relationship and she and her baby needed out,” Amato said in the video. “But as is often the case in these situations, [she] did not have the resources. I gave her a car to use and allowed her to live in my rental house. The only requirement was that the boyfriend not be allowed inside the home. One night I learned he was there and I went with my brother and his two friends to try to get him to leave to protect my family member.  An argument took place between me and the boyfriend but it became clear she wanted us to leave before it escalated,” Amato says on the video.

The court docket report shows the the court case records were destroyed and unavailable to corroborate or disprove Amato’s version of the events:

However, a 2009 police report, obtained by the Sammamish Comment through a public records request, documents the witness accounts from that day. These cast a different light on Amato’s version.

According to the police report, on December 27, 2009, police were dispatched to Tacoma residence on a 911 call of threats to kill and intimidation with a weapon.  The victim, Paul Cardenas, told the police he was the boyfriend of Amato’s sister [who was living at Amato’s house], and while visiting his girlfriend and his daughter, Amato knocked on the door agitated and accused him of “messing up” his car and told him he didn’t want him around his sister anymore. Cardenas told the cops Amato said that if he saw him around his sister again, he “would [explicit] kill him.”

Cardenas, who is Hispanic, said he asked Amato whether he didn’t want him around his sister because he has dark skin and long hair.  “That’s part of it, but the other part is that you are a fucking piece of shit,” – Cardenas claimed Amato told him.

The police report then details Cardenas’ account of him leaving the house while Amato keeps threatening him. “If you come around this house or my sister, I will [explicit] kill you.” As Cardenas was walking away, Amato’s brother and two of his friends appeared from the side of the house, holding two shotguns, one of them “cocked” a shotgun, pointed at Cardenas and threatened to kill him.

Police observed Cardenas was visibly shaking and had to gather himself several times when they interviewed him as he believed from Amato’s tone of voice and the presence of a gun that his life was sincerely in danger.

She told police she was gathering Cardenas’ property when the shotgun incident occurred outside. While breaking out in hysterical crying, according to the police report, Amato’s sister said he has never done anything like that before, but she did confirm he threatened to “[explicit] kill” her boyfriend.

The sister told the police she couldn’t believe that Amato had threatened to kill her boyfriend, and stated they (herself and Cardenas) had just spent Christmas [two days earlier] with her family and there were no problems.

The police report also summarizes an interview with a third witness, Eric Schimming, who told police he was “hanging out” with Amato and Amato’s brother, Joseph, when Amato became very angry about his sister’s boyfriend wrecking his car and wanted to go confront him about it.  Schimming witnessed Amato yelling at Cardenas that he would kill him when Joseph Amato “came around the corner with the shotgun and pumped it” and yelled “I’ll shoot you in the face!” – Schimming told the police.

Police arrested Josh and Joseph Amato that evening. Two shotguns were recovered from their home. Court records show Amato was charged on January 21, 2010, for harassment and threatening bodily injury, a misdemeanor, in the Tacoma Municipal Court and was granted bail on a $2,000 bond.

On September 2, 2011, the prosecutor agreed to dismiss the case if Amato complies with conditions set by the judge.  A year later the case was dismissed.

Amato said in his video he pled guilty to a misdemeanor because he couldn’t afford to keep his attorney through a jury trial.

Connection to a hate group

During the same time he was having legal troubles, Amato was the campaign manager for Dick Muri’s election campaign to congress.

In September 2010, Amato asked for an endorsement from an anti-immigration group called Alipac on behalf of Muri’s campaign. Alipac says on its website  it “fight[s] against the costly and deadly illegal immigration & illegal immigrant invasion of America.”

The links above are in the source and point to pages on Alipca’s site with hate speech against illegal immigrants.

Amato submitted to Alipac an endorsement application on behalf of Muri’s campaign in which he pledged:  “I understand that the failure of the Executive Branch to secure our borders and enforce existing immigration laws is depriving all Americans of a Republican form of government and depriving our states of protection from invasion as mandated by the US Constitution.”

“I intend to use the power of Congress to immediately remedy this problem that is costing many Americans their jobs, wages, taxpayer resources, property, security, and sometimes their very lives,” Amato wrote Alipac on behalf of Muri.

Two years before Amato’s request for Alipac’s endorsement, in 2008, the the Anti Defamation League (ADL) published a report titled “Immigrants Targeted: Extremist Rhetoric Moves into the Mainstream” in which it explained that “Unlike the Ku Klux Klan and neo-Nazis, who make no attempt to hide their racism and bigotry, anti-immigrant groups and coalitions often use more subtle language to demonize immigrants and foreigners.”

The rerport details Alipac’s branding of undocumented immigrants as “murderous criminals infecting Americans with diseases.” For example, in 2007 Alipac’s founder said “we got a half a million felon illegal aliens that are on the run, half a million… that are out there tonight, murdering, raping, assaulting and stealing from Americans…”

In May 2009, the ADL reported that White supremacists and anti-Semites, including David Duke of the KKK, have promoted Alipac by engaging in activity on its behalf and posting links to ALIPAC’s website.

Concealing the connection to Alipac

The current Alipac web page with Amato’s pledge shows as if it was Muri who submitted the pledge, not Amato, as the screenshot below shows: 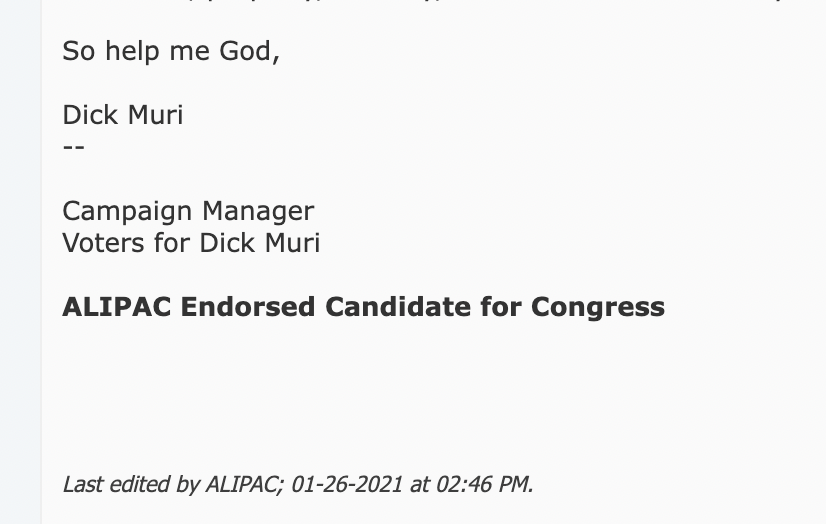 This current version of Alipac’s web page also shows it was edited on January 26, a week before Amato announced his city council run on February 4 and a week after the city of Tacoma released Amato’s arrest police report to the Comment.

The Comment obtained the previous version of the same page, from November 29, 2020, showing Amato’s name and phone number as the signer of the endorsement submission, and how his name was carefully edited from the current version of the page:

The phone number that was edited out of Alipac’s web page in January matches the number listed on Amato’s city council campaign registration page.

Amato did not respond to The Comment request for his comments on this story.