A group of about half a dozen Sound Transit (ST) representatives were told Thursday by Sammamish citizens that they want more service in addition  to a new, proposed park and ride at the north end of the city.

options for sites for the new park and ride facility to be located in the northern part of Sammamish.

As a part of the Sound Transit 3 (ST3) bond package approved by voters in the 2016 election, Sammamish voters were promised a 200-car park-and-ride facility that was to be located somewhere in the northern portion of the city.  The objective would be to have the facility completed in 2024, concurrently with the extension of ST light rail service to Redmond.  Cost of our P&R is estimated (and budgeted) to be $23m (2018 dollars).  It would have a 200 car capacity (by comparison, the Pine Lake P&R is 260 cars).  Both single level as well as multi-story structured options were given initial consideration.

While the meeting was to discuss park-and-ride site selection, many of the attendees were much more interested in voicing their complaints about 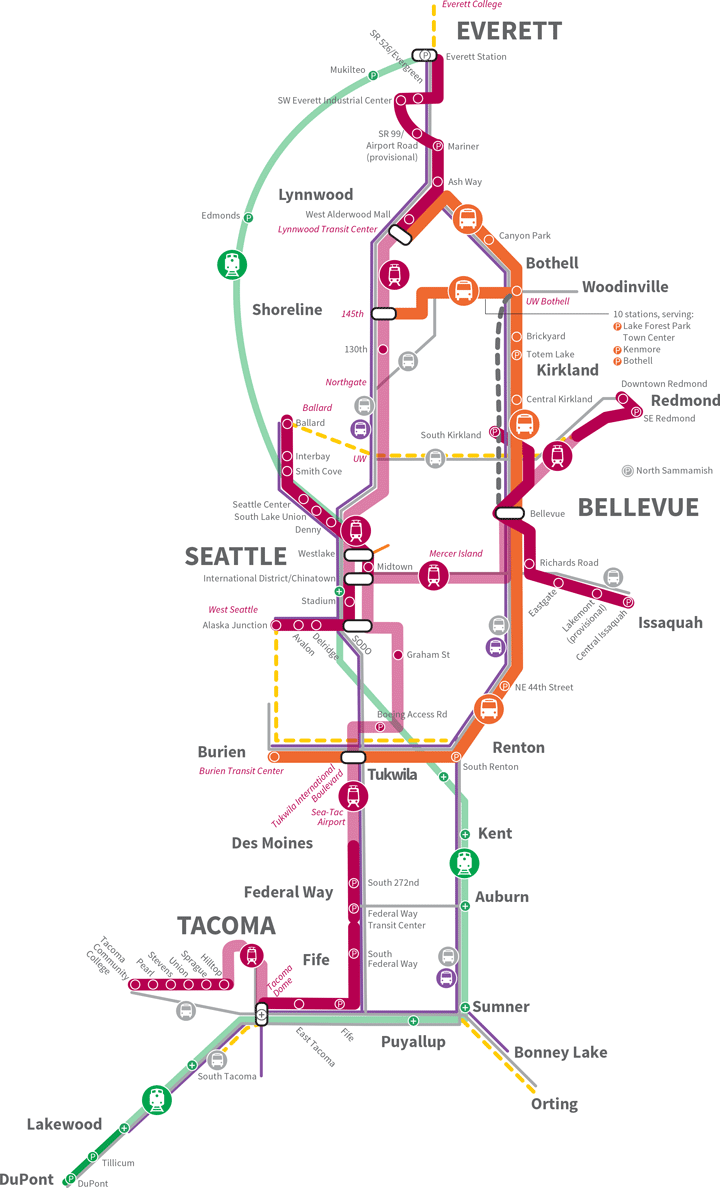 Sound Transit 3 expands the lite rail to Redmond and Issaquah. The agency proposed a park and ride for Sammamish.

what they view as poor service on existing bus routes, specifically the lack of expedited, direct services to other areas in the metropolitan area such as the center of Seattle and the University of Washington campus.

The ST staff that was present were not actually the right folks and did their best to answer the concerns.  However, the suggestion of waiting until light rail reached Redmond and then having ride a connecting bus from Sammamish to Redmond to connect to a light rail ride routes through Overlake, South Bellevue, Seattle and then finally reach the UW campus was somehow less than satisfying to many. This will be the subject of a future edition of this publication.

To date, the process has gone through three rounds.  Initially, 15 locations along the 228th Avenue NE corridor within the city limits of Sammamish (and the ST Regional Transit taxing area) had been picked by city and ST staff for evaluation.  Many of these are currently in use as stormwater runoff collection sites and many–but not all–are city-owned.  Of the 15 sites considered, 10 were located between the Safeway shopping center and city hall.  Another five were located north of NE 4th Street/Inglewood Hill Road.

The initial down-select process reduced the 15 to five for further evaluation, with none north of the Inglewood Hill intersection.  A further down-select changed the five to three for the purpose of the evening’s meeting discussion.

To date, the three finalist sites are:

The screening criteria used were stated to be as follows below:

While all of the above are sensible criteria, it appears that weighting used may have favored avoiding storm water issues, shared usage, and taking advantage of existing infrastructure to save on  construction cost through shared use.  Construction costs were estimated at $15,000 for each slot for a surface lot to $50,000 for a multi-level facility.

Little weight appears to have been given to traffic impacts, particularly the offloading of traffic on the north 228th and Sahalee Way corridor.  People are not going to put up with a 15-minute drive to the Town Center area, potentially a 1,000 foot walk (in the case of site 10) and then more time on the bus than a more northerly pick-up point, especially if they have a good chance of finding the lot full upon arrival.

In response to a direct question by The Comment, the ST delegation indicated that potential future expansion capability at any of the possible sites was not a consideration.  This seems like an important oversight.

The shared usage philosophy means that ST is looking for “partnerships” to assist in the construction and operation.  Not really discussed was the status of the employee transportation currently provided by the Microsoft Connector and similar services offered by Google, Amazon, and others for the benefit of their employees.

While on the surface this may sound reasonable, the reaction of the audience to the shared use concept was decidedly negative in view of the history of many of the Eastside P&Rs being completely full by 7:00 am on most weekdays.  The overflow could negatively impact adjoining businesses and community facilities, such as the Community Center, library, and city hall which already experience parking shortages.  Aside from potentially significantly limiting any future expansion of CWU, use of a major part of the CWU campus might result in effectively denying Microsoft their current use of their portion of that facility’s existing parking.

Do the Three Sites Really Serve the North Sammamish Community?

Interestingly, none of the three “finalist” sites are truly located in north Sammamish, although the CWU location (a few blocks south of the Safeway area) is the most “northerly” of the three sites.  All are really central Sammamish locations and as such could have significant impacts–and not necessarily positive–on existing traffic flows along the 228th corridor through increased volume and turning movements, both of which would slow traffic flow in the area.  Also, two of them are within the boundaries of the Town Center project.

This is quite different from the objective that former Mayor Don Gerend and the other members of the then-existing City Council (including myself) had at the time of our initial discussions with ST management on the location for our relatively small benefit for our very significant property tax contribution to the overall ST3 project.

In addition, their value to the majority of the residents in the northern half of the city is limited as many would begin their trip with a backhaul to the park-and-ride site that would substantially increase their overall travel time.  It would also increase rush hour traffic in one of the busiest parts of our city that could also be aggravated by additional vehicle volume that is currently on Sahalee Way or 244th Ave N.

Overall, there appeared to be a lack of enthusiasm for any of the three finalist sites.  The location originally talked about at the time of the 2016 election (at the Gray Barn location at the intersection of Sahalee Way and SR202) did not make even the initial list, primarily as it is outside of the ST taxing district, although just barely.

This is a good thing for three reasons:  first, it is at a key intersection crucial to the commute pattern for residents of northern Sammamish.  Inserting turning buses and cars into that mix is not the world’s best idea.

Secondly, it is way too close (less than 100 yards) to Evans Creek, which is a major Chinook and sockeye salmon spawning and hatchery area and just across the street from a major salmon habitat restoration project.

Third, at 200 cars, it would quickly be full, as Sammamish commuters would be competing with people from the Fall City, Carnation, and Ames Lake areas.  These three communities need a park-and-ride but theirs needs to be located further to the east on SR202 where their residents can be intercepted and transferred to busses.

It is legally a separate organization from Metro although Metro actually provides the drivers for the ST bus service and services by both ST and Metro are highly coordinated.

Tom Odell is a former Sammamish City Council Member who also served as mayor. During his tenure, he and other council members tried to convince Sound Transit and Metro Transit to increase bus service to Sammamish. Their efforts were largely unsuccessful. With this report, Odell becomes an occasional contributor to Sammamish Comment.