Tomorrow is also when King County Elections mails the ballots for the Aug. 1 primary.

Four Council seats are up for vote in the Nov. 8 general election: Positions 1, 3, 5 and 7. Three of the races, 3, 5 and 7, have three active candidates running, requiring a primary vote Aug. 1. The top two vote-getters will advance to the November election.

Position 1 has only two candidates running. This position won’t appear on the Aug. 1 ballot, with these two candidates going directly to the November election.

Sammamish Comment submitted a three-page questionnaire about City issues to the candidates last month. They were asked to return them by July 7, allowing for processing for publication beginning tomorrow.

The questionnaires were checked for spelling and grammar by The Comment, but otherwise will be printed verbatim with their responses.

Take note that Transportation questions were framed and answered before the July 10 City Council meeting at which concurrency and transportation management planning studies were discussed; hence, there are no references to last night’s meeting on these issues.

Although Position 1 does not appear on the Aug. 1 ballot, The Comment submitted the questionnaire to these candidates for publication in order to have all candidates responding to all questions at the same time.

An opportunity will be presented to the eight candidates advancing to the November election to update their responses. Additional questions (notably referencing last night’s transportation issues) will be added to the update.

One candidate, Roger Chapanis, withdrew from the election June 23, citing health reasons. However, this was too late to be removed from the ballot. Hence, his name appears under Position 7, along with three others whose candidacies remain active.

Sammamish does not have “wards” or “districts” for the City Council. All seats are voted on city-wide.

The map below shows the approximately resident locations of the candidates running for the November election (in blue) and for the three incumbent Council Members who are not standing for election this year (in green). 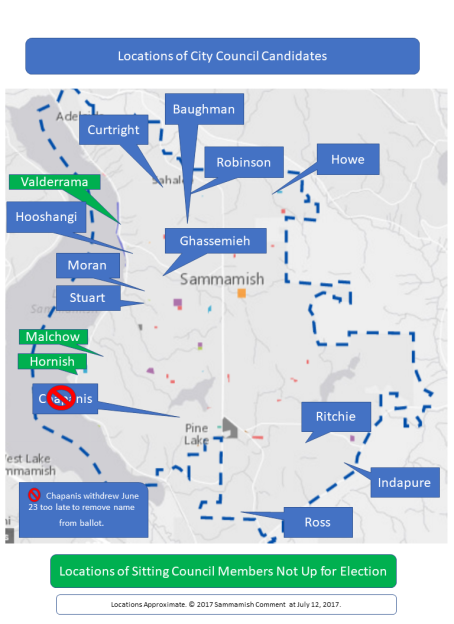