In Part 1, the background, objectives and membership of the Planning Advisory Board was described. In Part 2, the PAB gets down to work writing Sammamish’s first Comprehensive Plan. In Part 3 today, the focus shifts to the creation of the Town Center Plan, a sub-area of the Comprehensive Plan.

The Sammamish Planning Advisory Board (PAB), tasked with writing the City’s first Comprehensive Plan, finished all elements except the complex topic of developing a commercial-office-retail element that was better than the strip malls created by King County.

These malls were formally known as Sammamish Highlands at NE 8th and 228th Ave. NE, the Pine Lake Center at 228th and Issaquah-Pine Lake Road and the 7-11 complex on East Lake Sammamish Parkway. Sammamish Highlands, not to be confused with the neighborhood of the same name at the far south end of the City on 228th, was more commonly known as the Safeway complex. This included the commercial stores across 228th (McDonald’s and other retailers) and eventually Saffron across NE 8th.

The Pine Lake Center was more commonly known as the QFC complex.

When the first draft of the Comp Plan was completed, the PAB proposed several alternatives for commercial development. Under State Law, this was standard procedure. Usually Comp Plans had Alternatives 1, 2 and 3 and a No Action Alternative.

The No Action Alternative is self-evident: don’t do anything and proceed as before.

The alternatives contained in the Draft Comp Plan were as follows:

Context of the times

It’s important to remember the context of the times.

Sammamish at this point was less than four years old. Services were scant. Then Council Member Ron Haworth liked to say you couldn’t even buy a pair of socks on the Plateau. It was a slight exaggeration, but the quip made the point perfectly.

Residents wanted more restaurant and retail choices. Some wanted offices to supplement home businesses. Under the State law, the new City had to meet growth and job targets.

These desires and requirements had to be balanced against preserving the environment, a slow-growth mentality and keeping trees.

The City scheduled a public meeting in 2001 at Discovery Elementary School on 228th Ave. to unveil and explain the Draft Comp Plan, including the three Alternatives and the No Action Alternative.

Neighborhoods didn’t want focused commercial centers to which they could walk or gather at places like a coffee shop.

Nancy Whitten would make opposition to the Corridor and Village concepts the centerpiece of her 2001 campaign for City Council vs incumbent Ken Kilroy. (She ended election night 17 votes ahead, but lost in the final count by 147 votes.)

By default, this left the focus in and around City Hall and what would become the Sammamish Commons the Preferred Alternative.

This preference will be important to remember as we proceed through this story.

Kicking the can down the road

With the public comment received, the PAB returned to work to finish the work on the Comp Plan, incorporating citizen comments and with the intent to complete the work on the Town Center plan.

As noted in Part 2, the City Council directed the PAB to wrap up its work and hand off the Comp Plan to the Council for its review and approval. This left the Town Center planning undone. Temporary zoning of R-4 (four units per acre) was put in place to comply with State requirements. But nothing on the Town Center planning proceeded. None of the PAB members was happy at being unable to finish their job, but orders were orders. Member Jon Griffin was the only member to stand on principal and voted No when making the final PAB approval and sending the Comp Plan to the Council.

Concurrent with its direction to end the PAB work, the Council said it would establish a special process to determine what citizens wanted in a Town Center.

Thus began eight more years of work, plus another year to approve implementing regulations. A Town Center Study Committee, a Town Center Task Force, two terms of the Planning Commission and several back-and-forths with the City Council itself would occur.

By the time it was done, from the PAB through the Planning Commission, five citizen committees and commissions involving 70 Council appointees. Between 2002, when the first study committee was appointed, and 2010, when the last regulation was approved, five terms of the City Council reviewed the Town Center plans, with several members leaving and joining the Council throughout.

The citizen committees included a cross section of interests, similar to that of the PAB (though with fewer members). The seven-member Planning Commissions included two developers. Scot Jarvis was an investor in the Kent Center town center. He served as the first chairman of the first Planning Commission. Richard Amedei served as a member of the Commission for four years. He had been employed by Safeco’s real estate development division and was deeply involved in the development of Redmond Town Center.

The experience and expertise of these two Planning Commissioners will be important to remember.

The borders of the Sammamish Town Center were esablished by the 2002 Sammamish City Council. The internal roadway concepts ultimately were included in the finished Town Center plan. Click on image to enlarge.

The 2002 City Council set the boundaries of the “special study area” to be part of the Town Center. Broadly, it was an irregular shaped square transversing 228th Ave. from Main St. to SE 8th on the east side of 228th; and a slightly larger area on the West side. SE 4th bisected the area going east and west, thus creating four quadrants: the Northeast, Southeast, Northwest and Southwest.

The tasks assigned the various committees and commissions were to define what kind of commercial-retail-office (from this point forward lumped in as “commercial” for simplicity) and residential space would be within the boundaries; how much commercial space and how many residential units would be allowed.

Ultimately, the traffic and environmental impacts, design standards and all related issues would be considered.

All this is lumped into the Town Center sub-area plan of the Comp Plan.

Many, many public meetings and tours of other cities were conducted to provide data and public comment.

Each one of the citizen committees, and the two Planning Commissions, concluded that all the commercial and much of the residential should be concentrated West of 228th around and near the Sammamish Commons, City Hall and Library. (The Community Center came much later, after the Town Center plans were approved.)

These conclusions reflected the public sentiment expressed at the Discovery School public meeting in which citizens were clear they did not want commercial development on both sides of 228th.

Within the Western portion of the Town Center, the committees and commissions decided that the “wedding cake” approach of dense center-core development would give way to less dense the farther out from the core development occurred.

The groups concluded that the properties east of 228th should be up-zoned closest to the Sammamish Highlands and step down to the R-4 zoning closest to SE 8th, in keeping with the wedding cake approach.

The thought process included the physical realities that there is a steep hill on 228th. The Northeast quadrant is an easier walk to the Sammamish Highlands. Walking uphill to the Sammamish Commons is challenging with groceries or baby buggies.

The land at the bottom of the two hills, SE 4th and 228th, would be less dense west of 228th and increase in density at the top of SE 4th west of 228th, directly across from The Commons.

At least that was the thinking.

The City Council had other ideas.

Property owners east of 228th in the Northeast and Southeast quadrants wanted commercial and residential priorities with hundreds of thousands of square feet of commercial space. The proposals would shift the core of the Town Center to east of 228th, away from The Commons.

At one point, a proposal came into the Planning Commission for more than 1.3 million square feet of commercial space—larger than Redmond Town Center.

The idea was flawed on several counts.

Scot Jarvis, the Commission’s chairman and an investor in Kent Center, agreed.

Even the City’s own consultant said Sammamish could only sustain 500,000sf of commercial.

The roadways couldn’t remotely support a development of this scale. It was a ridiculous proposal that didn’t get even passing consideration.

The Council settled on 600,000sf and 2,500 residential units. Each quadrant was allocated a portion of the commercial and residential, with most of it going west of 228th. Critics called this the “peanut butter” approach, spreading around everywhere something for everybody.

Jarvis, expressing his frustration in his role as chairman of the Planning Commission, noted that each time the City Council got a recommendation it didn’t want, it appointed another committee.

The world’s economy blew up beginning in September 2008 with what would become the Great Recession. The deepest economic decline since the Great Depression, the length Recession dried up capital and halted projects all over the globe, the US and Washington State. Even Bellevue’s grand developer, Kemper Freeman, put projects on hold. Build out of Issaquah Highlands was halted.

The launch of the Town Center development was stillborn.

Construction capital dried up as the financial markets imploded. Projects underway on the Eastside and elsewhere were stopped. Launching new projects was a non-starter.

As the years passed and financial markets began to reopen for business, the first priorities of developers were to finish the projects that had been put on hold, then move on to new projects.

So it was with the Sammamish Town Center. Finally, in three of the four quadrants ground was broken. The first, in the Northwest Quadrant, is anchored by Metropolitan Markets. It will open early next year. 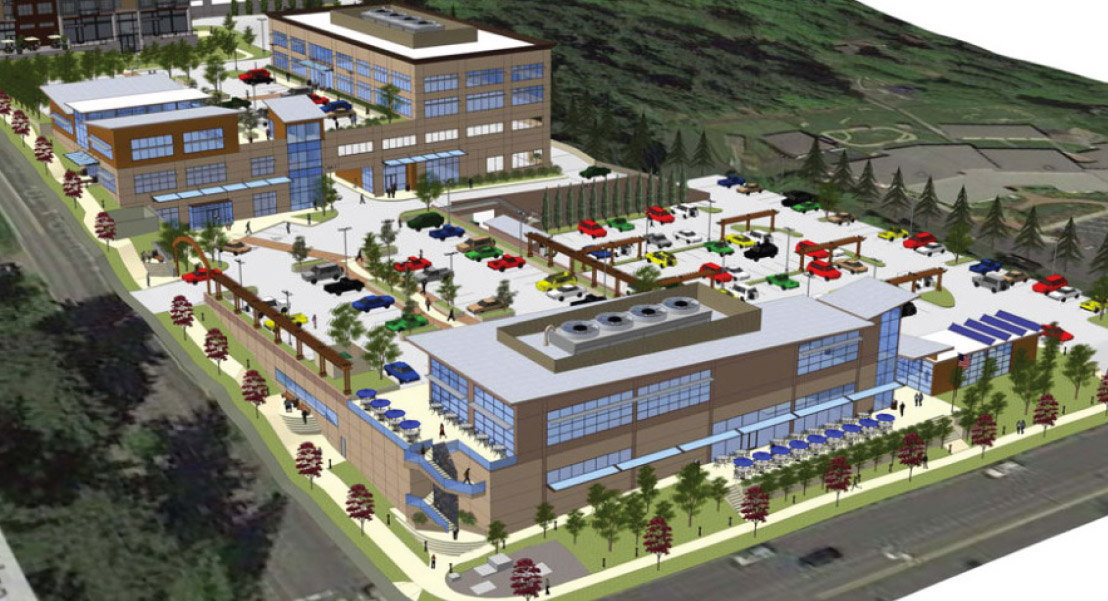 The first project for the Sammamish Town Center, at SE 4th and 228th Ave., anchored by Metropolitan Market. It opens in 2017. Click on image to enlarge.

The Town Center will transform Sammamish from a bedroom community reliant upon services in Issaquah and Redmond to one that has its own heart and soul. There are trade-offs, of course. Trees had to come down. There’s the real potential of negative impact on Ebright Creek, the salmon-bearing home to Kokanee. The head of the creek resides in Sammamish Commons.

Traffic on 228th Avenue will increase to near-capacity. Traffic on streets leading to the Town Center will see dramatic increases.

But this nevertheless fills a desire of the residents when Sammamish was incorporate for more local services and choices. Some of today’s residents, who moved in long after the incorporation, may view the Town Center development as a nightmare. But for many, it fulfills a dream.

Next in the History of Sammamish: the 2003 election–a 4-3 minority becomes a 6-1 majority.