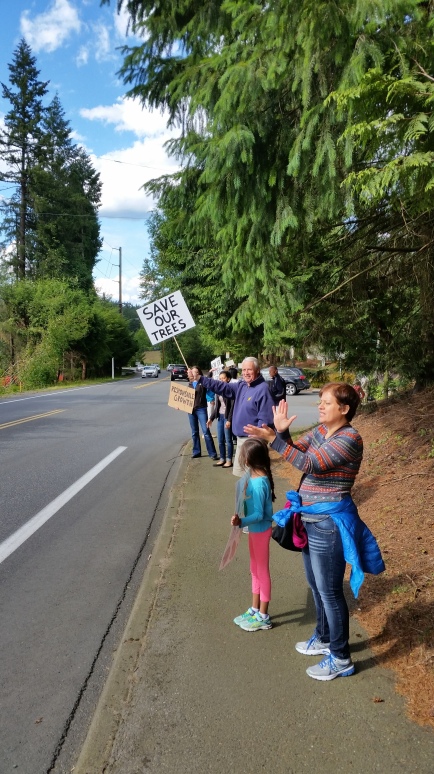 Protesters objecting to tree removal for the Conner-Jarvis project.

Citizens lined up along Issaquah-Pine Lake Road at 40th Place, across from the Conner-Jarvis development, to protest the large removal of trees to make way for 115 homes.

The project, approved under the prior Sammamish tree retention ordinance requiring retention of 25% of the trees on site, nonetheless caused shock with the community when a stand of trees along Issaquah-Pine Lake Road disappeared.

The current tree retention ordinance, passed last year, requires 35% tree retention and reforestation. It was approved too late to have impact on Conner-Jarvis.

Only two City Council Members, Tom Hornish and Christie Malchow, appeared at the protest to lend their support.

Stacy Wollenberg Peters, one of the neighbors of Conner-Jarvis, unloaded on the City Council Tuesday night.

“I’m here today to share my frustration with the City’s approach to Development and growth. I understand this is a complex issue with various rules and regulations that govern the city’s actions. However, from what I’ve seen, heard, and learned recently, the City’s process seems to be deeply dysfunctional. From my perspective, City Planners appear to be to working alongside and to the benefit of developers, granting variances and mitigations where ever possible. The City Council appears to be impotent, without appropriate oversight of the City Planning Department. Further, current citizens are thwarted from providing meaningful input that would shape the future of our city. I would like to see increased oversight by City Council of the City Planners; adherences to environmental regulations rather than the loose variances granted freely; and focus on infrastructure and the aggregate impact of development on our city’s roads, schools, wildlife and general livability. Thank you.”

She was one of several citizens to say during Public Comment that they were concerned about the loss of trees in favor of development. Mayor Don Gerend responded to one that Sammamish now has the toughest tree ordinance in the state.

The project became an election issue in the 2015 City Council races, a poster child for complaints that the City Staff was approving variances to the City code to approve one project after another. Tree retention was not specifically an issue in this project, however, until the trees began coming down last month.

Facebook and letters to the editor of the local papers lit up with complaints. The City responded that the tree removal was according to the previous 25% code.

The stricter code was adopted after protests over the rape-and-scrape of the Kamp property on 228th Ave. SE at SE 20th and projects along Inglewood Hill Road to make way for new homes.

But by the time the stricter 35% code was adopted, there was only 2.5% of the land remaining in Sammamish that would be affected by the stricter standards. The stricter code was too little, too late.

Although a series of City Councils liked to self-brand as strong environmentalists, none of the members pushed for stronger codes, with toothless enforcement and fines, until early last year–long after it was too late to have meaningful impact.

Gerend and Council Members Tom Odell and Kathy Huckabay have been on the Council the longest of the current members and bear responsibility for failing to have the vision to seek stronger tree retention ordinances. Each is up for election next year. The fourth Council Member up for election next year is Bob Keller, who has only been in office two years. Ramiro Valderrama just won reelection to his second term last November. Hornish and Malchow were elected to their first term last November.