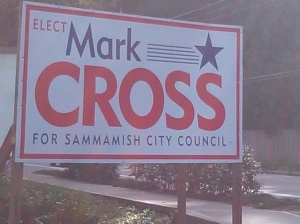 Sammamish gave City Council candidate Mark Cross one week to remove this sign at Inglewood Hill Road one block east of the roundabout despite being in the public right of way and blocking the line of sight for cars entering Inglewood. This photo is taken from the driver’s seat of a car aligned with the stop sign’s white road stripe. To see westbound traffic on Inglewood, it is necessary to pull well forward of the stop sign’s white stripe. Cross’s opponent was given 48 hours to move a similarly sized sign out of the right of way on Sahalee Way. No safety issue was involved. Click on image to enlarge.

Chris Hankins, the City’s code enforcement officer who handled the three cases, said that when Cross’ signs came to his attention Monday, Cross was notified that the signs had to be moved “immediately, but no later than Friday,” five days after the violation was recorded. He said “there’s absolutely no preferential treatment” that was afforded Cross despite the disconnect between the deadlines given Malchow and Valderrama of 48 hours to comply with City code.

“I would disagree with that” characterization of a disconnect, he said. He could not explain why Valderrama and Malchow were given a 48 hour deadline. “That’s a good question. It’s decided on a case-by-case basis,” he told Sammamish Comment.

“Just to be clear, there is absolutely no preferential treatment,” he said again.

Cross, a former Council Member and Mayor, is endorsed by the ruling power structure of the Council, Mayor Tom Vance (who is also running for reelection and whom Cross endorsed), Deputy Mayor Kathy Huckabay, and Members Tom Odell and Bob Keller. Cross is also endorsed by Council Member Nancy Whitten, who refused Cross permission to erect a large sign on her property while allowing Valderrama and Vance’s opponent, Tom Hornish, and Valderrama, to do so. Whitten provided Malchow a positive quote for her campaign.

The seventh member of the City Council, Don Gerend, hasn’t endorsed anyone.

Malchow’s sign was on Sahalee Way, erected with permission on property she believed to be private. But she was notified the Sahalee Way right of way extended to the property owner’s fence line and the billboard-style sign had to come down. Under City code, small “yard” signs may be erected in the City ROW, but not large billboard signs. Malchow said she was given 48 hours to remove the sign and did so within eight hours.

Sammamish gave Council Member Ramiro Valderrama 48 hours to move this sign back several feet out of the right of way on Inglewood Hill Road. This sign is parallel to the road and presented no line-of-sight safety issues. The sign originally had been erected one foot behind the mailbox in the foreground. Click on image to enlarge.

Cross was given to the end of business today (Friday, Oct. 16) to remove his sign. Within hours of Sammamish Comment’s inquiries on Thursday, Cross removed them. Hankins said he recontacted Cross on Thursday about doing so.

Valderrama said he was tagged for two of his billboard-style signs. One was erected on a utility fence and the other adjacent a mailbox, both on Inglewood Hill Road. He said he was given 48 hours to remove the signs.

Hankins said Valderrama asked for, and was granted, the weekend to comply. This shows the flexibility the City used to work with candidates, Hankins said. Malchow said she was not given this option.

Valderrama raised $12,763 from 86 groups and supporters. He is nominally opposed by Hank Klein, who dropped out of the race too late to remove his name from the ballot. Valderrama is treated as an outsider by the ruling majority, who recruited Klein to run against him.