I’ve obtained the certified election results of the Klahanie annexation vote to Issaquah, and plotted them out by precinct. Click the map to enlarge.

You’ll note that I’ve marked “SE 48th St. Extended,” which bisects the Brookshire precinct at the very southern tip. There has been discussion that this portion of the Klahanie Potential Annexation Area could be retained by Issaquah while the rest goes to Sammamish. This hardly makes sense to me, given that this is just the extreme southern tip of the PAA.

There has also been some suggestion that the southern precincts voting in favor of annexing to Issaquah be retained by Issaquah, which would then release the balance of the PAA to Sammamish.

This doesn’t make sense, either. This principal would disenfranchise Margery and Barclays, which also voted to annex to Issaquah.

Below are the election results data from King County Elections. Click the chart to enlarge. 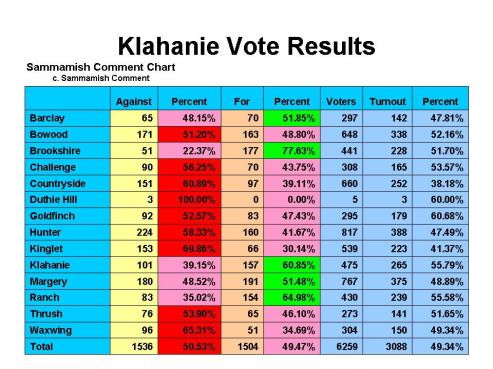 The only logical next step is for Issaquah to release the entire PAA to Sammamish. Issaquah will discuss this at the City Council committee level next week. An amendment to its Comprehensive Plan is required, and the city is in the process of considering amendments now. Action by the committee could be take this month or next.