Don Gerend declared once again that as a Sammamish City Council member, he wants to see Klahanie annex to Sammamish instead of Issaquah.

The area with 10,000 residents and a shopping center is, of course, in the Issaquah Potential Annexation Area. Issaquah officials met May 8 with a small group of residents at the Issaquah City Hall and has a meeting scheduled May 22 at Challenger Elementary School, 25200 SE Klahanie Blvd. at 7 p.m. to discuss possible annexation into Issaquah.

Gerend made the comment to a resident who lives in an unincorporated area between Klahanie and Sammamish and who doesn’t want to be part of Issaquah. The area is also in Issaquah’s PAA. The resident asked Sammamish to become involved, which can only be done if the areas are struck from the Issaquah PAA.

Gerend said that for 14 years (his entire time on the Sammamish City Council) he’s wanted to annex Klahanie.

A complicating issue has emerged over annexing Klahanie, however: this is Issaquah’s permit application the State Department of Ecology to inject stormwater into the aquifer from which Klahanie gets its drinking water and plans to effect a hostile takeover of part of the Sammamish Plateau Water and Sewer District that draws its water from that aquifer.

Issaquah also eventually wants to assume the part of the Water District that Klahanie falls within, even though as recently as May 8 the city said nothing would change on this point, failing to reveal its true intentions.

I wrote about this deliberately misleading action on the part of Issaquah previously. 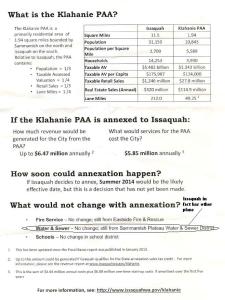 Clearly, Issaquah has some explaining to do with Klahanie, starting with why on May 8 it told Klahanie residents nothing would change about who provides water service to the area when plans have been underway for a long time to seek a hostile takeover of parts of the SPWSD, including the Klahanie area.

Then there are questions about the water quality protection of the aquifer that serves Klahanie. Although Issaquah claims its plan will be safe, the SPWSD has a different view. Klahanie residents might want to ask Issaquah and the Water District about this.

I have written several posts on this water topic. There are several links within the following to other stories by media. Here is a report from the Issaquah Press.

“We all drink from the same glass”

1 thought on “Gerend wants Klahanie; Issaquah to meet with Klahanie May 22”