Gov. Jay Inslee says he “can’t” veto SB6617, the bill the Legislature passed to exempt itself from the Washington Public Records Act, because it was approved by super-majorities that can override a veto. 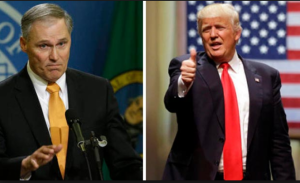 Gov. Jay Inslee stood up to President Trump. Will he stand up to the Washington State Legislature? Photo via Google images.

Or is it more like Inslee “won’t” veto it, using the veto-proof majorities as cover so he can pursue his own political goals, such as a carbon tax? Can he afford to piss off legislators with a veto to the possible detriment of his own agenda?

Far be it for Sammamish Comment to be cynical, but Inslee knows full well he can veto the legislation. Then it’s up to the legislators to decide whether to override the veto or reverse themselves.

Inslee had no problem standing up to President Trump the other day when in the national spotlight. He should stand up to the Legislature as well.

Email Inslee here and urge him to veto the bill.