Issaquah held an informational meeting May 8 about the potential annexation of Klahanie, an area of nearly 11,000 residents, and omitted a key piece of information: the city is pursuing a hostile take-over of the Sammamish Plateau Water and Sewer District, the provider of their water service.

Nor did the city tell Klahanie residents that it is pursuing a permit with the state Department of Ecology that will inject stormwater into the aquifer that supplies drinking water to Klahanie.

So much for being open and transparent.

What would not change with annexation

In this flyer, Issaquah says it does not have plans to provide water and sewer service to Klahanie. What the city is not saying is that it does have plans to include Klahanie in its future utility service. In Issaquah’s own 2012 Comp Plan, the city clearly shows Klahanie inside the “Future Retail Service Area” (Figure 2.0x). 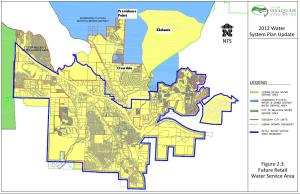 Why does this matter? Keep reading below the jump.

My sources in Sammamish tell us that Issaquah officials have approached Sammamish officials about joining to take over the water district in its entirety. Furthermore, Issaquah has been covertly planning to take over parts of the Water District that are in Issaquah. Mayor Ava Frisinger – who was in the audience Wednesday – only publicly acknowledged the assumption study when confronted with the facts by public comment at the May 6 City Council meeting.

Here’s why this matters.  Issaquah and the Water District have been at odds for years over Issaquah’s long-time efforts to resume injecting stormwater into the ground immediately above the aquifer and within 600 feet of the first of three District wells that serve 54,000 residents. The injection well was shut down by Ecology in 2008 when fecal coliform was detected in monitoring wells. The residents served live in Sammamish, Klahanie and other parts of unincorporated King County. Providence Point, Overdale, part of Issaquah Highlands and some other pockets are within Issaquah city limits. Studies indicate the stormwater runoff is contaminated with fecal coliform (bird and other animal poop), metals, bacteria and other pollutants from Issaquah Highlands.

The Water District wants the stormwater pre-treated to groundwater standards before it is injected into the ground above the aquifer so as not to contaminate the aquifer and it’s wells. State law actually forbids any contamination of a groundwater source. Issaquah says the soil will clean the stormwater. But design standards for injection wells call for a minimum of 25 feet of proper filtering soil above an aquifer. The LRIG (Lower Reid Infiltration Gallery) has only nine feet of highly pervious sand and gravel that separates it from the aquifer. In other words – not enough to adequately filter the contaminated water. During the rainy months, the aquifer’s water level is high enough to erase that filtering layer altogether. The Water District has repeatedly offered to co-fund a pre-treatment facility to protect the aquifer for both cities, but Issaquah rejected each offer.

Some Sammamish city council members (notably Don Gerend) have wanted for years to annex Klahanie, but the area is in Issaquah’s Potential Annexation Area.

The Issaquah Press has this story stating the annexation would cost taxpayers $6 million initially to annex Klahanie.