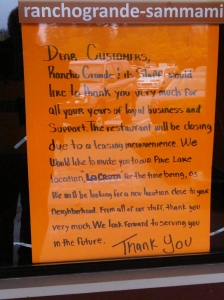 As just about anyone who reads anything in Sammamish knows, Ace Hardware lost its lease and would have had to move by September 2012. A public outcry, and pressure from the city, got the property owner, Regency, to extend the lease one more year.

But now Rancho Grande, two stores down from Ace, lost its lease and has closed last week. A sign on the window blames a lease issue.

A reader commented on another of our posts that Petco is supposed to take over the old Hollywood Video and the Rancho Grande space. The reader also claims Trader Joe will take over Ace’s space. Neither is confirmed.

I did talk with a doctor at Swedish Pine Lake Medical Center. Swedish had wanted the Ace space, but, the doctor says, it’s no longer available.

If the Petco story is true, this will essentially force Civilized Nature out of business.

Regency doesn’t seem to care one whit about our local businesses.