The March 12 issue of The Sammamish Reporter has a long article about cell towers called Selling our Skyline. While the headline is hyperbole–Sammamish is hardly “selling the skyline–” the article does a good job of explaining the issues.

Unfortunately, Sammamish previously had opportunities to deal more effectively with this issue and frankly, the City blew it.

The very first City Council, serving from 1999-2001, had the opportunity to deal with cell towers and do so in a manner that would have all-but-eliminated the prospect for 120-ft monopoles.

Before Sammamish was a city and still under King County jurisdiction, Western Wireless–the predecessor to T-Mobile (with Voice Stream in between)–applied to install a 120 ft cellphone monopole at Skyline High School. At the time, I lived at the bottom of the hill on SE 8th St., east of the high school. I, along with Mary O’Brien of Arbor School and Brian McCabe, developer of a residential project next to the Plateau Country Club, appealed the application to a King County Hearing Examiner.

Under federal law, health issues were not then and are not now appealable. Concerns over microwaves associated with the cell tower had been excluded after successful lobbying before Congress by the cell phone industry. The only issue that could be appealed was aesthetics.

A 120 ft monopole is ugly. There is no other way to put it. That the Issaquah School Board agreed to lease the site, right next to the football field, to Western Wireless remains a puzzle, but it did.

O’Brien, McCabe and I simply didn’t want a 120 ft monopole at this intersection.

To make a long story short, through the advice of an old high school buddy of mine who was in business to facilitate cell tower applications (though not this one), we appellants negotiated an agreement with Western Wireless prior to engaging in a hearing to replace the plans for a 120 ft monopole and the associated antennae with a 16-inch diameter “unicell” on top of a light standard illuminating the football field. 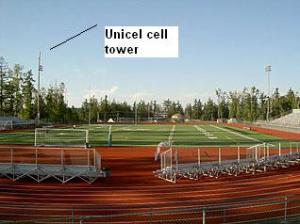 As a result of this experience, and knowing the new City of Sammamish would have to deal with this issue, I arranged for my high school buddy, the cell tower application facilitator, to appear before the 1999-2001 City Council and explain how it could adopt an ordinance that would minimize the prospect of huge, ugly monopoles, how cell towers can be camouflaged and how there are cell tower antennae that are options to companies that are unobtrusive to citizens.

In 2005, the City Council, according to the article in The Reporter, hired a consulting company to craft the cell tower ordinance later adopted by the City. There are good elements to the ordinance, but as we now know, there was a huge loophole permitting the 120 monopoles that later became controversies in Trossachs and now Tibbets Station.

Early last year or in late 2008, while I was still on the Planning Commission, I received a call from Ron Haworth, former City Councilman from 1999-2003, who asked me, as a commissioner, to consider changes to the cell tower ordinance because of an issue of a proposed cell tower in his back yard on an easement granted years ago to the power company. I explained to Ron that the issue was supposed to come before the Commission in 2009. It did–but not until toward the end of the summer. I had not followed the issue closely all these years and I was surprised to learn that the alternatives described by my high school buddy before the 1999-2001 City Council (ironically, Haworth was a member of the Council then) had come to No Action.

The Commission asked Staff to correct the deficiencies to the ordinance to prevent another Trossachs. We expressed interest in having a revised ordinance include alternatives such as camouflaging and illustrations of alternative antennae.

At the time, the Commission was told that the staff did not have the time or the resources to look up alternative antennae and ultimately the revisions that came back to the Commission were minor and–in my view–wholly inadequate. I provided staff with a number of photos grabbed from Google images I acquired in 30 minutes or less.

(Why didn’t the staff have time or resources? Staff was immersed in the Town Center regulations effort at the time, but frankly I think it was a priority and time-management short-coming.)

Given all the Commission had to work with was a minor modification of the ordinance, we voted a do-pass recommendation to the City Council, but honestly, I think the ordinance falls well short of what it should be.

The City Council should not muff this a third time.