The Sammamish City Council annually has a retreat in January. Its

purpose is multi-faceted, with the goals ranging from generating or affirming Council goals and priorities to agreeing on procedural and structural improvements to help us provide the City of Sammamish dynamic, strong, and effective leadership.

The retreat kicked off on Thursday January 18th for a dinner that was used to lay the foundation for the entire retreat and ultimately for the year. This evening included Council, the City Attorney, and the City Manager.  The public may attend and did have one member of the public present.

Council discussed our rules and procedures as a body.  This includes the current meetings format we have.  The consensus was the first Monday of each month’s study session will move from the 4:30pm start to 6:30pm to be congruent will all the other meeting times we have.

The first Monday of the month study session will end at 8:30pm.  We kept the alternating study session and regular business meeting schedule, with the last week of the month off.  All other meetings, unless noted, will start at 6:30pm and conclude at 10pm.  This, of course, with the caveat that meetings can be extended if needed.

We also agreed to make efficiencies in our meetings, with the aim of ending by 10pm instead of over packing agendas and running meetings until midnight…or later. 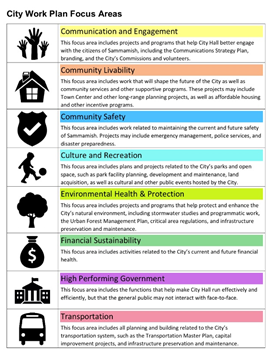 Click on image to enlarge into a crisp view.

Friday was a day-long work session that incorporated all Directors and other staff to workthrough priorities and goals.

We started by defining what was most memorable about ourselves, our leadership styles, and ultimately our long- term visions for Sammamish.  The morning was concluded with discussing our long-term priorities for the next 3 to 5 years.

My take away from this discussion was the need for us not just as a body, but as a City is to be more innovative.  To allow staff and Council the ability to innovate process and opportunities.  We have already noted some of this since January when the City moved away from printed binders of Council packets to the online version saving staff time, paper, and money.  Along with that, came a new website dedicated to the Council, its calendar and agendas.  Be sure to note that new website.

Friday’s biggest topic was the 2018 work plan.  Staff worked to break down all the work to fit into eight Focus Areas show in the graphic.  Greater detail can be found on these Focus Areas with the hyperlink.   As Council went through what its priorities would be for 2018, we designated them by these focus areas.  Many of the Council’s priorities and goals fit into multiple buckets.
The Council’s number one priority remains: Concurrency/Traffic.  The new Council reaffirmed its desire to keep this as a must in terms of the work being done on the Transportation Master Plan (TMP) and Concurrency as a mechanism to ease the traffic congestion issues that plague the Plateau.  But in addition to completion of the TMP and concurrency, Council also created overarching priorities as it goes through City business in 2018 (these are not in rank order):

Some of these priorities will be a part of each outlined priority.  For example, our City’s financial stability certainly touches the transportation elements and environment (among others).  Communication and Engagement will be found in each and every priority, so instead of being in a silo, it will be a horizontal goal touching every priority.  Related to communication, it is noteworthy to mention the full Council was introduced to our new Communications Director, Kellie Stickney who will help Council and the City to realize its goal of community engagement and informing them in a variety of methods.  My hope (and request) is to have these priorities remain very visible during the year so that we keep them top of mind in everything we do.

Saturday’s big topic was the budget.  The City does a biennial budget, so this is a big year for the Council.  An overview of the process, statutory deadlines, was given to help get the newer Councilmembers up to speed and the full Council on the same page.

We took a deep dive into our 2017-18 revenues, expenditures, comparisons with other Eastside jurisdictions spending and revenue sources too.

We discussed the Council’s needs in 2018 for passing the budget without strife.  Some of these suggestions included a zero-based budget, an alternative budget that has a percentage cut, an alternative budget with the same percentage added to the budget (with the assumption of some increased revenue source to provide that), looking at services based on core government services (ie. police, fire) versus non-core services (ie. passport service).

Also discussed during the retreat was the local and regional committees that members of the Council will serve on for 2018.  While formal decisions cannot be made at the retreat, the Council was able to discuss and will formalize committee selections at an upcoming Council meeting.

To conclude, as we move into 2018 with a distinctly different Council, many staff members remarked at how well we worked together, how much fun they had and how invigorated they felt moving into 2018.  I’d call that a pretty successful retreat.  I look forward to working for all of the residents of Sammamish alongside the Council.

Christie Malchow is the mayor of Sammamish. She was first elected to the City Council in 2015 and named mayor this year.

Editor’s Note: The views and opinions of the writer do not necessarily reflect those of Sammamish Comment. This column was edited for spelling, style and grammar content but otherwise appears as it was submitted. The content and conclusions are solely the product of the author of this column.

1 thought on “Setting priorities at the Council retreat”