Saturday was a blustery, rainy and generally miserable day.

Sammamish Citizens Corp. to hold its Info Hub exercise. There were reports of power outages. Trees limbs and debris came down throughout the City. On 212th Ave. SE between SE 29th and SE 33rd streets, a limb came down on power lines, severing one and landing on two or three, causing shorts and a small fire at the out-of-reach power lines where the limb crossed the lines. The Eastside Fire & Rescue and the Sammamish Police blocked off the southbound lane of 212th through the area. 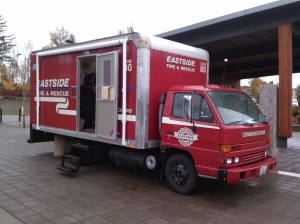 The Info Hubs located throughout the City radioed reports to each other and to the Communication Command Center, an ER&R enclosed truck, parked at Sammamish City Hall..

Citizens could report what they see throughout the City to the Hubs and get information of street blockages and power outages from them.

The Citizens Corp. holds these Info Hub exercises every time there is a fifth Saturday in the month, or about four times a year. It is well short of a full disaster drill exercise, but as could be seen on Saturday, these are useful events. HAM radio operators join in the exercise, an important means of communications in the event of a major disaster. Phone service would likely be interrupted. Cell phone service will be spotty at best. The bandwidth will quickly be overwhelmed and back-up batteries at cell phone towers will last only a few hours. Text messaging will likely be more reliable than trying to phone, because less bandwidth is required.

The Citizens Corp. passed out calendars that details what supplies should be acquired to prepare for a disaster in which residents need to be prepared to survive without government assistance for at least three days and preferably more.