With the annexation by Sammamish of the Aldarra and Montaine neighborhoods, more than 300 homes join the city in the far northeast corner on Duthie Hill Road south of SR 202. These neighborhoods are next to Trossachs.

Combined, Trossachs, Aldarra and Montaine had slight more residences than the 2,000 proposed for the Town Center. With the nearby High Country, which are high-end homes on acreage, there are roughly 2,500 homes in this area of Sammamish. There is a rural area between Trossachs and High Country that is outside the Urban Growth Boundary (UGB) line called “The Notch.” We have referred to this before. With these annexations, it’s time to discuss The Notch in detail and how it might fit in with future growth plans in Sammamish.

This entire area is essentially an “island;” it is connected to Sammamish only via Duthie Hill Road and a circuitous routing around Klahanie and Beaver Lake. Trossachs in bounded on the north by Soaring Eagle Park and the only entrance/exit to this ~1,700-home area is via Duthie Hill. Aldarra and Montaine are also captive to Duthie Hill.

Because of the circuitous routing to the rest of Sammamish, access to the Pine Lake (QFC) and Sammamish Highlands (Safeway) centers, and the proposed Town Center in the heart of the city surrounding City Hall is inconvenient at best. Thus, this “island” has to drive everywhere to work, shop and recreate. The shopping area of Klahanie and perhaps the small one on SR202, plus the others in Issaquah and Redmond are currently the most convenient service areas for the Island.

There is a potential opportunity for commercial and residential development to serve the Island, and this is eventual development of The Notch. 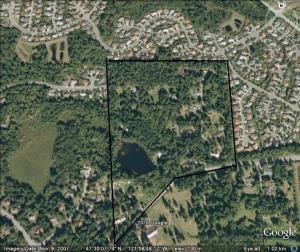 “The Notch.” Trossachs is to the North and West; High Country is to the East; Duthie Hill Road runs along the South.

As recounted in an earlier post, there was an attempt in 2008 to identify The Notch as a Potential Annexation Area (PAA) for Sammamish. For a variety of reasons, the County did not agree to this plan and The Notch remains rural, unincorporated covering roughly 44 acres. Only about 16 acres in buildable, with the balance being sensitive areas and buffer zones.

Although those wishing to join Sammamish wanted residential zoning, and the City Council applied to the county at R-1 (one unit per acre) zoning (a gross misuse of the land in an annexation, in my opinion, I believe any future annexation proposal should consider a mixed use similar to Juanita Village in north Kirkland.

A development such as Juanita Village would provide a number of amenities within walking distance of many areas of Trossachs and High Country (and, for the more hearty, Aldarra, Montaine and more of Trossachs), plus jobs. New housing opportunities, including affordable housing, would also be provided. Some vehicular trips would be redirected to The Notch rather than Klahanie and other areas outside Sammamish, thus increasing the tax base and revenue for our city. The Notch could also attract some business from the SR202 corridor.

How soon might this happen? Not very. The City will have to ask the County again to identify The Notch as a Potential Annexation Area, and this can’t happen for another couple of years. But the City should invite a dialog with the residents of The Notch, Trossachs, Aldarra, Montaine and High Country in plenty of time to discuss the possibilities.

While I think a Juanita-type development for this area has a lot of merit, this is bound to be controversial. That’s why bringing the prospect of this becoming a PAA, and under what zoning, should be undertaken late this year or next year. It would be a long discussion…so the time to get started is sooner than later.